Stuart Hilborn invented the fuel injection system and it became the system of choice in racing, beginning with his hot-rod V8 and then the Meyer & Drake Offys. He is still active and, like the others of his generation, is using the computer to design and manufacture his products. One of them is an experimental rotary-valve throttle design to be tested on an IRL/Aurora engined car shortly. This provides a nice introduction to the man, leading on to the thought and reality of continuous change and improvement in racing, by racing people having the competitive instincts of the Racer’s Edge.

Stuart was born in Calgary, Alberta around 1917. The family moved to Pasadena in about 1930 after which they made a number of moves in the Southern California area. In 1935 Stuart graduated from high school and then went on to Los Angeles Junior College. He majored in chemistry but had not yet acquired an interest in cars. In about 1938 he went to work for a large paint company, remaining with them until 1949, while serving three years in U.S. Army Air Force. He formed an idea for delivering fuel to the engine by means of injector nozzles which would spray the fuel, fed by a high-pressure pump, at a constant pressure to a point right above the valve. When the valve opened the fuel would be pushed into the engine by its own pressure. Air would be sucked in if naturally aspirated or pushed in if supercharged to complete the mixture for ignition on the power stroke. This simple device revolutionized automotive fuel systems and is now used on virtually all passenger and racing cars. Stuart continued to refine his injector systems at his factory in Aliso Viejo, California into his 80s. 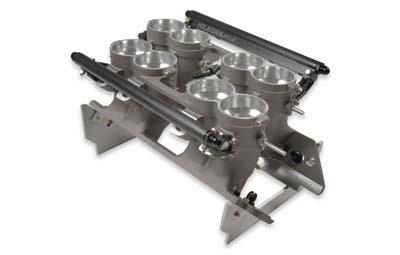